The Golden Milk is also known as Turmeric Latte or Golden Latte and it’s famous not only for its intriguing golden-yellow color but also because of its potential health-promoting properties.

In this post, you will find out how to make a delicious hot or iced turmeric latte by following an easy recipe.

This golden milk drink has been increasingly gaining popularity in the Western world for a while now.

The peak of its consumption is usually during the flu season, as there is evidence that its active ingredient (curcumin) may boost our immune system. 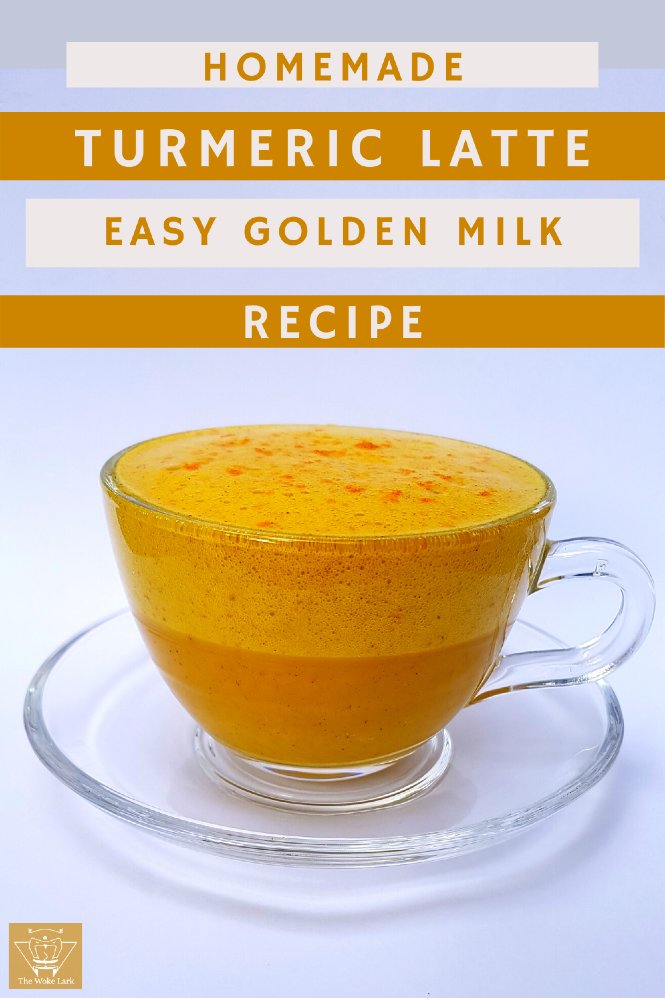 Turmeric has actually been used in Ayurveda for centuries, and it’s been suggested that it may have anticancer, hepatoprotective, cardioprotective, hypoglycemic, and antiarthritic properties (source).

The health benefits of golden milk are to be further discussed in the next section of this article.

In this post, you will also find essential recipe components that may enhance the positive effect of a homemade turmeric latte on one’s well-being.

Without further ado, let’s dive in.

Golden milk is made with turmeric powder.

The active ingredient in turmeric that’s been linked to a number of health-promoting effects is curcumin.

It’s been suggested that this polyphenolic compound has anti-inflammatory and antioxidant properties.

Some studies report that curcumin may improve digestion, and it may also prevent Alzheimer disease, heart disease, and arthritis.

According to some scientific reports curcumin may also reduce anxiety.

There is also evidence that it may decrease the blood sugar levels or maintain them within a healthy range, which is the reason why curcumin has drawn scientists’ attention as a potential treatment for diabetes.

As you see, there are a lot of reasons why one would want to have a cup of tasty golden milk at home.

Still, there are a few things that are to be considered while exploring the health benefits of the turmeric latte.

The first thing that we need to point out is the fact that curcumin is known for its limited solubility and poor bioavailability.

This means that instead of being absorbed in the body, a significant portion of the ingested curcumin will be excreted in feces.

In other words, we won’t be able to take advantage of the health-promoting effects of this beneficial polyphenolic compound.

With that being said, scientists are trying to come up with different ways to increase the bioavailability of curcumin.

There is evidence that piperine (a bioactive compound that black pepper contains) increases the absorption of curcumin in the human body.

That’s why black pepper is one of the most important golden milk recipe ingredients.

Adding black pepper to your homemade turmeric latte may significantly increase its positive effects on your health.

When I make golden milk at home, I add 1 teaspoon of turmeric per 8 fl. oz. (240 ml) serving. A teaspoon of ground turmeric weighs around 5 grams.

During my research I found that the curcumin concentration in pure turmeric powder averages 3.14% by weight.

This means that a teaspoon of turmeric powder which weighs 5 grams contains around 160 mg of curcumin.

The thing is that most studies that examine the beneficial properties of curcumin, use doses of between 500 mg and 2000 mg of curcumin per day.

This might mean that you need to have at least 4 – 5 lattes per day to experience the health-promoting effects of curcumin.

Even though I’m aware of this, every once in a while, when I feel like my health needs enhancement, I’d have a golden latte every day for at least 10 days. Not 4 or 5 lattes, just one cup per day.

This way I make sure that I’m consistently introducing to my body around 160 mg of curcumin per day for an extended period.

I don’t know whether it’s the placebo effect or not, but when I do that it always feels like the turmeric latte does improve my overall well-being.

Besides its health benefits, the golden milk also tastes great, so I’ve always enjoyed it being part of my daily routine.

Here are the ingredients you’re going to need in order to make golden milk (turmeric latte) at home:

In the following photo, you can see all of the ingredients that I used to make a cup of golden milk at home. 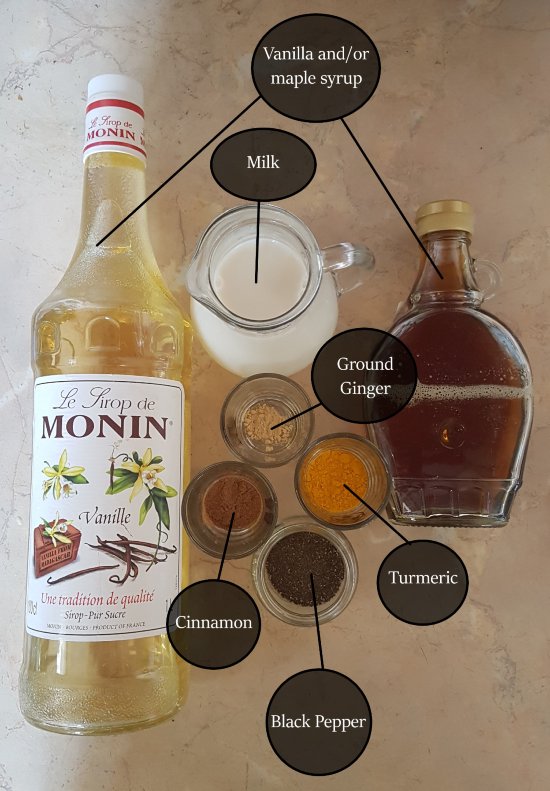 To make golden milk (a turmeric latte) at home, do the following:

Here you can see my homemade golden milk served in a cup: 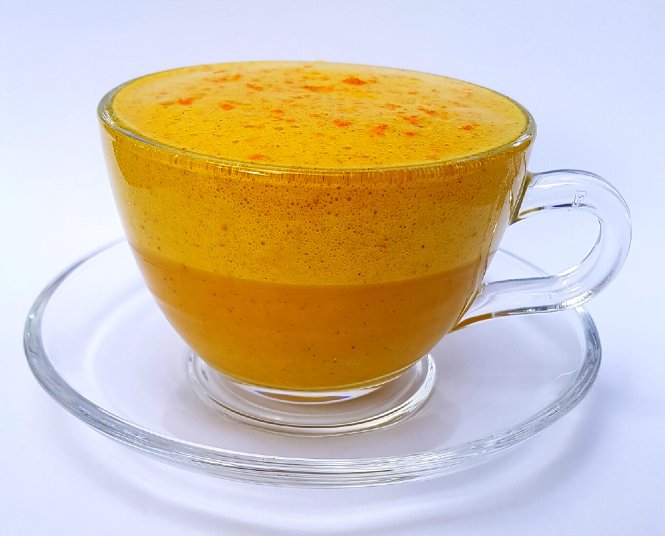 To mix and froth the already heated turmeric latte I used a battery-operated drink mixer like this one by Zulay. There are also rechargeable milk frothers, like the one by FoodVille, seen on the following photo: 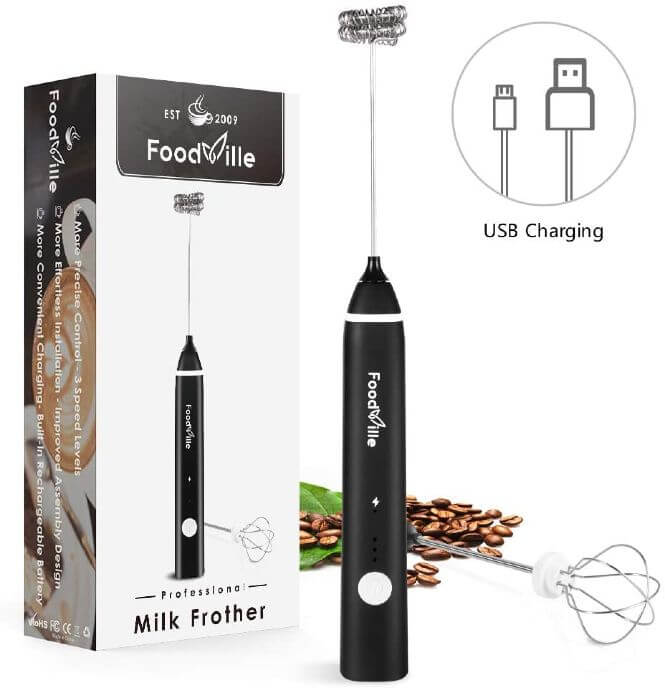 You can check out its price on Amazon by clicking here.

These devices are very convenient to use, affordable, and efficient at adding texture to your homemade drinks.

You can also make your golden milk with coffee, by simply adding an espresso shot to the frothed turmeric milk. This will make your healthy latte more energizing.

Furthermore, coffee is known for its high antioxidant activity, so the addition of an espresso shot may further enhance the health-promoting effects of your homemade golden milk.

If you don’t have an espresso machine, your second best option is to add 2 fl. oz. (60 milliliters) of coffee, brewed in a stovetop coffee maker. You can check out my full guide on how to make Moka pot coffee here.
Cook Time 5 minutes
Total Time 5 minutes

*I prefer using plant-based milk for my homemade turmeric latte. I usually stick to either unsweetened almond milk or canned coconut milk. With that being said, you can make your golden curcumin drink with whole, nonfat, cashew milk, or whichever kind you want, according to your personal preference.

*To froth the milk I used a battery-operated hand mixer. You can check it out in the "Recommended Products" section below.

As an Amazon Associate and member of other affiliate programs, I earn from qualifying purchases.

During my research, I also found a scientific report which suggests that cooking increases curcumin’s solubility and its anti-cancerogenic properties.

That’s why when I feel like having an iced turmeric latte, I do bring the mixture of milk, turmeric, black pepper, cinnamon, ginger, and vanilla syrup to a simmer first. By heating all of the ingredients I increase their beneficial potential. Then I run the liquid through a sifter, wait for it to cool off, froth it and pour it over ice cubes. 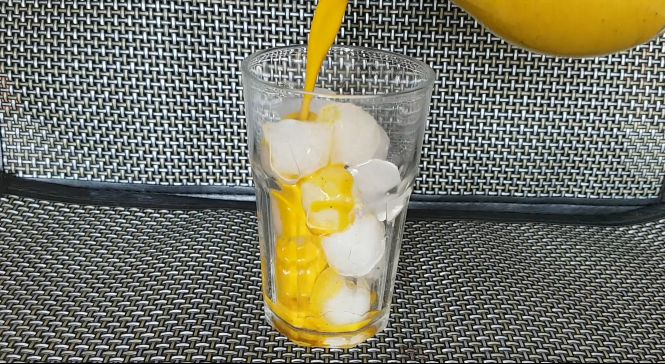 That’s how I recommend making a glass of iced golden milk.

The iced version is very refreshing and, as you might’ve guessed, delicious. 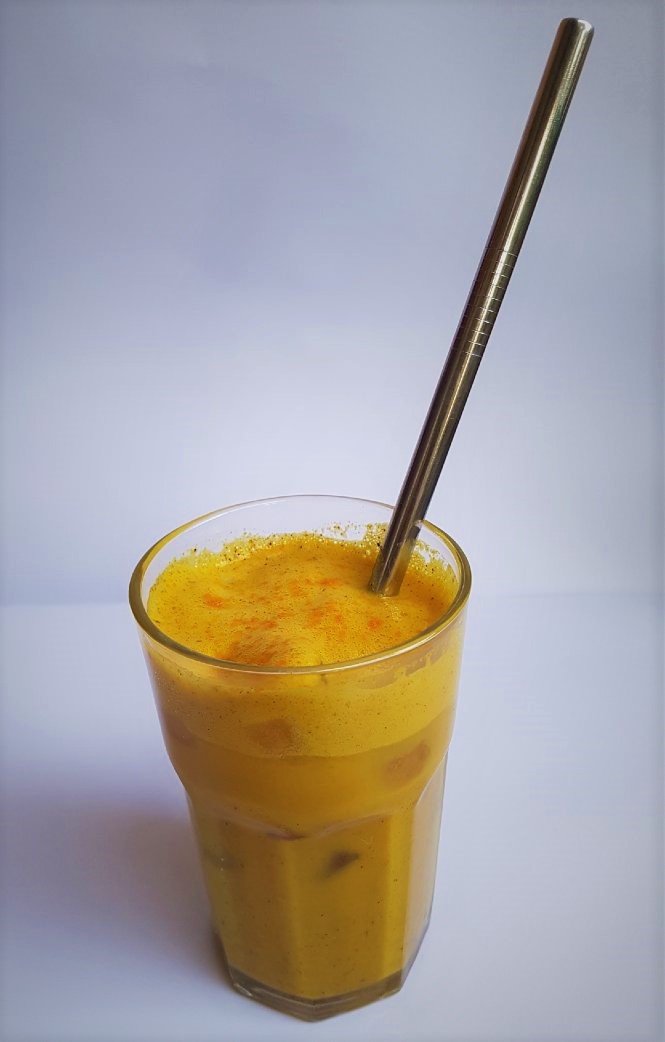 To make a dirty iced golden turmeric latte, you can 1 fl. oz. to 2 fl. oz. of cold brew concentrate. You can check out my complete guide on how to make cold brew coffee in a jar by clicking here.

I hope that you found my step-by-step recipe helpful and that you learned something new by reading my post.

Making a cup of golden milk at home shouldn’t be just for the sake of having something healthy. The turmeric latte is a yummy treat that will help you relax and enjoy the moment.