Many people are putting their used coffee grounds down the kitchen sink, without ever having an issue with a clogged drain.

Others use DIY scrubs made of spent coffee grounds when they take a shower. The ground coffee beans of the homemade body exfoliant go down the shower drain at least once a week, but could they accumulate and cause a blockage?

I’ve come across some sources suggesting that you can actually use coffee grounds to unclog drains, but I’ve never tried doing that. I do occasionally put an espresso puck in the sink and flush it with water down the drain. Nevertheless, this only happens rarely, when I’m in a hurry and it’s an exception rather than the norm. 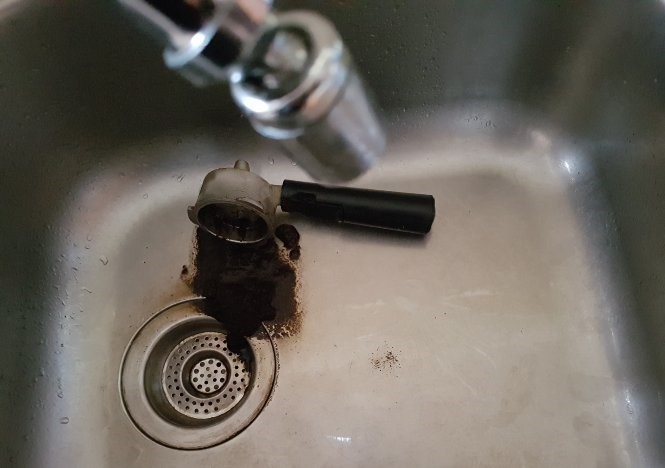 Whether they come from my French press, AeroPress, Chemex, or espresso portafilter, I usually throw away spent coffee into my compost bin.

But can coffee grounds actually help clean or deodorize drains as some online sources suggest? Is it a good idea to toss them down the toilet?

I did thorough research and no matter whether you’re on a septic tank or city sewer, here you will find out whether it’s a good idea for coffee grounds to go down the drain.

Can coffee grounds go down the drain?

You shouldn’t pour coffee grounds down the drain, as they will likely clog it up.

They stick to the buildup of congealed grease and other organic materials that go down the kitchen sink drain pipe. 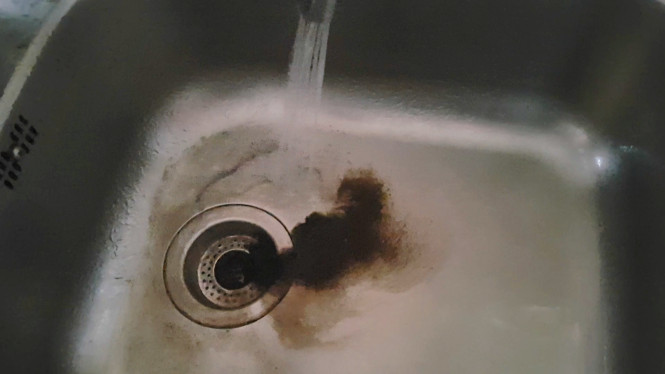 Ground coffee beans won’t break down and will gradually accumulate, becoming part of the drain sludge.

Dumping coffee grounds in your sink daily will eventually cause a drain blockage.

Author’s note: It should be noted that coffee grounds aren’t the main cause of kitchen drain clogs.

The main culprits are fatty substances, such as oil, that go down the drain each time you rinse your dishes.

As the grease flows down, it congeals and sticks to the sides of the pipes.

The layer of grease accumulates over time.

Therefore, when you put coffee grounds in the sink, even if you flush them with lots of water, they often stick to the sludge buildup.

Instead of cleaning a drain (as some sources suggest), they can slow it down considerably or clog it.

So following these thoughts, it’s safe to say that it’s a myth that you can unclog drains with coffee grounds.

However, if you accidentally dump ground coffee beans down the kitchen sink disposal, make sure you run enough water to wash them down.

If you don’t do that, they will dry out and settle between the impellers or in the drain pipes.

Once this happens, even if you run lots of water, the liquid won’t be able to push through and remove the dried grounds that are stuck.

If you don’t flush the coffee grounds with water timely every day they will eventually accumulate and block your garbage disposal or drain.

Can coffee grounds go down the shower drain or toilet: Septic Tank vs. City Sewer

Some would say that it isn’t that big of a deal if you pour your used coffee grounds down the toilet or down the shower drain.

Nevertheless, if you live on a property with a septic system, the coffee grounds won’t break down in your septic tank.

They will add up to the layer of non-decomposed solids.

So if you throw spent coffee grounds down the shower drain or toilet regularly, you will have to pump your septic tank more often.

This will cost you money that you can easily save by disposing of your used grounds the right way.

The spent coffee may also mess up the PH of the septic tank by acidifying it.

This acidification may have a negative impact on the function of the septic tank’s bacteria and may disrupt the process of decomposition of natural waste products.

So, overall, it’s safe to say that you shouldn’t pour coffee grounds down the kitchen, shower, or toilet drain if you are on a septic tank.

Doing so may not have as many undesired consequences if you’re on a city sewer.

Even if finely ground, coffee beans can still block a kitchen sink or clog a shower drain, but it’s rather unlikely for them to cause a huge issue in your building’s drainage system.

So an occasional DIY coffee body scrub that’s going down the shower drain won’t cause much trouble if you flush the spent coffee with plenty of water.

This way it won’t settle on the sides of the pipes and won’t clog them.

Author’s Note: If you accidentally throw a bit of ground coffee in the sink, don’t stress out, just rinse it with water.

It’s not even a big deal if the few grounds that are left on the bottom of your portafilter (after throwing the major portion in the trash) end up going down the drain regularly.

Nevertheless, if all of your used coffee waste goes down the drain every day, sooner or later, it will cause an issue.

Then you will either have to pay for a plumber or learn how to unclog your sink or garbage disposal on your own.

If you’re currently in such an unfortunate position I can tell you that you can either use a plunger or a drain snake to unclog your drain.

If those options don’t work you might need to remove the sink trap to clean the coffee grounds.

Using a chemical drain cleaner, such as Drano will work too.

Unfortunately, I’m not great at plumbing, so I should avoid giving advice on that matter.

The good thing is that there are great online sources that will help you solve this problem on your own if you’re willing to put in the effort.

How to dispose of ground coffee beans?

Now we should clarify how to best dispose of coffee grounds efficiently.

Used coffee grounds are beneficial as an addition to a compost bin so it’s best to dispose of them by throwing them onto the compost pile.

They can also be used in the garden as mulch or as fertilizers for certain houseplants.

If you don’t have a compost bin, a garden, or any houseplants, then your used coffee grounds should go into the trash bin.

Author’s note: In this guide by The Woke Lark, you can find all the best ways to reuse spent coffee grounds. I’ve also found through trial and error that they can’t be used twice to make more coffee.

I usually dispose of used coffee grounds in the following way:

I have a sealed plastic container that usually sits right next to the sink. I throw the organic kitchen waste (including the used coffee grounds) into it. 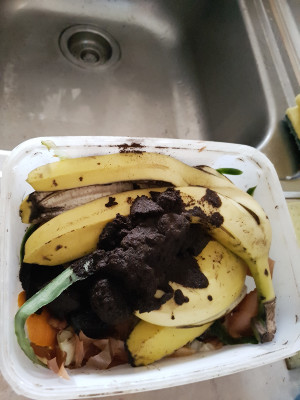 Here’s a photo of my compost bin: 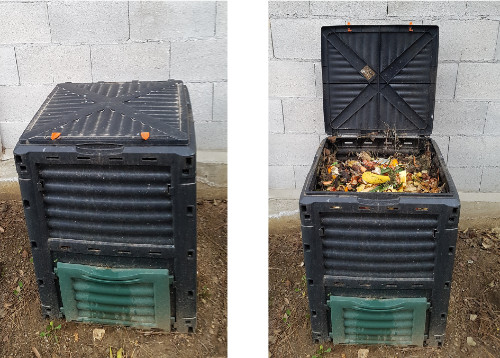 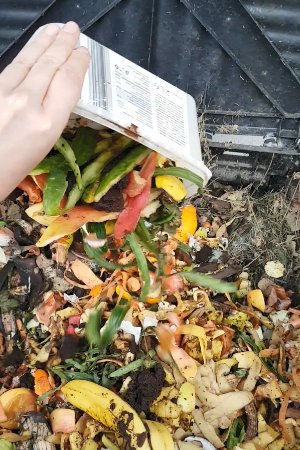 If I brew coffee with Chemex filters, Hario V60, or an Aeropress, I toss the wet coffee filters along with the spent grounds into the compost bin, as the filters are compostable too.

Author’s Note: You can also use coffee grounds to properly dispose of medicines. You can visit this FDA page to find out more.

How to dispose of coffee grounds from a French press?

It might seem too much of a hassle for you to dispose of used coffee grounds the right way, especially if you use a full-immersion brewing method with a device like the French press.

Pour over drippers and drip coffee makers come with convenient-to-throw-away paper filters that you can easily grab and dispose of without creating a mess.

But when you see the grounds on the bottom of the French press you might be tempted to rinse it in the sink and let all the grounds go down the drain.

It’s actually easy to avoid doing that. You just need a metal strainer.

Before I start with the whole process of cleaning a French press, I remove its plunger and dismantle the brewing chamber from its metal base. 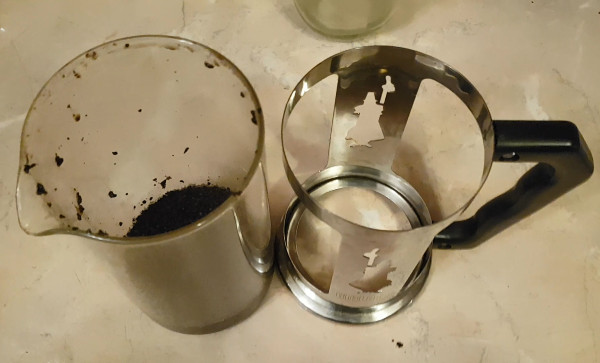 So here’s how to dispose of used French press coffee grounds easily:

After throwing away the grounds, you will have to rinse off the strainer from the remainder. 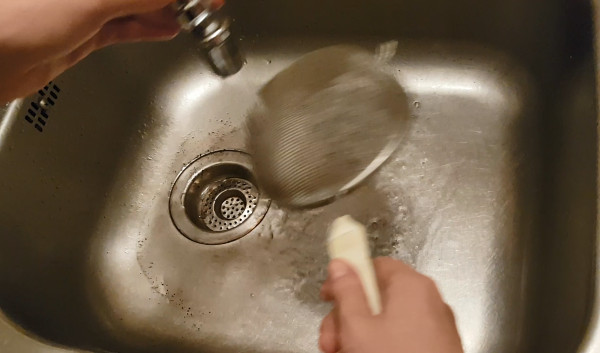 It’s inevitable – there will still be a few grounds that will go down the drain, but a negligible amount. To make French press coffee in my 8-cup French press, I use 54 grams of ground beans and 900 ml of water. If I flush all the grounds down the drain too often, they will eventually block it. By using the method above I avoid any undesired consequences and drainage clogs.

Even if you’ve been pouring your ground coffee beans down the drain for years without it causing a problem, it doesn’t mean that it’s a good idea to do so. If they go in the sink daily, coffee grounds will eventually impact your drainage system negatively. You don’t have to wait until this happens to start doing the right thing. And the right thing is to throw your grounds onto the compost pile or into the trash can.

2 thoughts on “Can Coffee Grounds Go Down Your Sink or Drain Safely?”