If you, like me, have been having a cup of Joe every day for years you have most likely experimented with your drink’s condiments.

In that line of thoughts, I wonder whether you’ve ever thought about sweetening your coffee with some sort of honey?

Is sweetening coffee with honey good for you?

For some of you that are only concerned about flavor, it might be easy to determine whether putting honey in a cup of coffee is the right thing to do.

Nevertheless, I made sure to answer a variety of questions related to the subject matter in order for you to make an informed decision.

So if you’re in a hurry, here’s what you should consider if you’re about to have coffee with honey:

I usually prefer my morning cup pure black but a while back I decided to switch up my coffee routine and reach out to the raw honey jar.

At the same moment a memory resurfaced – my high school Spanish teacher was always saying that coffee is better if you put honey in it instead of sugar. I decided to try that out and added a teaspoon of honey on the bottom of my cup and then pulled an espresso shot. It turned out to be too sweet for me, so next time I added half a teaspoon to my espresso and it tasted just right. The cup I made after was enriched with a bit of cinnamon and a splash of milk (truly delicious).

Since then every time I have my coffee sweetened, I put honey in it as it tastes much better than sweetening my morning caffeinated drink with sugar. Some people might argue that it doesn’t taste good in coffee, but, naturally, in terms of flavor, it all comes down to personal preference.

I find the coffee made with a bit of honey well rounded, the sweetness seems better distributed, somewhat milder and the overall flavor is pretty satisfying.

So I recommend trying it out – add honey to your black coffee at least once and see whether it suits your taste.

If you put a teaspoon of honey in a cup of coffee you will basically be adding 21 calories to your drink’s calorie count. In comparison, a teaspoon of sugar has only 16 calories (12 if you use brown sugar). Nevertheless honey is sweeter, so you’d probably use half a teaspoon instead. This means that by substituting sugar with honey, you won’t be significantly lowering or increasing your calorie intake.

That being said, if you’re monitoring your calories in an attempt to lose weight or improve your overall health, it would be slightly better to sweeten your coffee with honey.

This is because, generally, raw honey has a lower glycemic index (GI) than white sugar. This is why it’s been suggested that it may be used as a sweetener instead of sugar by patients with diabetes.

If you consume your coffee with sugar there is a higher chance of subsequent sugar crash and a sudden decrease in your energy levels. In such cases, in order to regain your powers, you’ll likely eat something, which will add up to your daily calorie intake.

You might avoid such undesired consequences if you sweeten your coffee with raw honey instead.

It’s worth noting that the glycemic index of honey varies within a quite a wide range – from 32 to 85. There is also evidence that honey with higher fructose content has lower GI. So GI really depends on the type of honey you buy.

If you buy pasteurized and filtered honey from the supermarket you will likely end up with one that has a greater than 60 Glycemic Index value.

So try to opt for a floral raw honey to sweeten your coffee instead.

Honey has been used for centuries as a complementary medicine because of its antioxidant and antimicrobial properties.

Scientific papers suggest that by consuming it you may recover from sore throat faster.

So if you’re indisposed, add honey to a cup of coffee and you may experience improvement.

According to a number of studies that I’ve stumbled upon during my research, this natural sweetener may also improve oral wellness because of its antimicrobial activities.

However, when you’re putting honey in your coffee you don’t actually add a significant amount – only a teaspoon or two. Realistically, the beneficial substances that you’re going to ingest by having coffee with a bit of honey aren’t enough for you to experience a notable positive impact on your health.

Still, don’t you even think about increasing the amount you add – honey is above all a type of sugar. Consuming a large amount on a daily basis isn’t a good thing.

On top of that, some of its beneficial substances aren’t present in highly processed honey packets (often offered at cafès) and pasteurized honey bottles sold at supermarkets. So always try to opt for raw honey whenever possible to increase its potential benefits.

You should also be aware that the antibacterial potency of honey varies among different sorts. So if you’re wondering which one you should go for, check out the well-researched Manuka raw honey (click the link to check it out on Amazon) and consider adding that one to your cup of coffee.

It’s worth noting that if you add honey to your coffee while the latter is still hot, some of the temperature-sensitive antioxidant substances may get destroyed. So if you want to keep those in, after brewing wait for the coffee to cool off a bit and then add your honey.

Could it be toxic?

While doing my research I found that some people are concerned about putting honey in hot coffee as they think it might become toxic.

Just like my parents and grandparents, I have been drinking hot tea sweetened with honey since I was a little child, so that rumor had me slightly concerned.

According to Ayurveda (one of the oldest holistic healing systems), you shouldn’t be heating honey above 104°F (40°C), as if you do, it will become toxic to your body. I decided to dig around and see whether there are studies that back up that information.

What I found is that an organic compound called 5-hydroxymethylfurfural (HMF) is formed when heating honey.

HMF may be deleterious for human health and is, in fact, found in various food products such as breakfast cereal, bread, caramel, and even coffee.

Because of our daily exposure to HMF, the compound has drawn scientist’s attention to further investigate its effect on human health and estimate its tolerable daily intake (TDI).

It’s also worth noting that there is proof that HMF has some positive anti-allergen and antioxidant properties that are to be studied further.

When it comes to its concentrations in honey, in the scientific review I linked to above, it is accentuated that the levels of HMF in honey not only depend on whether or not it’s been heated.

I won’t dive deeper and include other HMF-related information that I’ve come across.

Overall, if you want to minimize the chances of introducing higher doses of HMF to your body, you shouldn’t add honey to coffee (or tea) while it’s hot. You can instead wait for the coffee to cool off a bit. If you follow this advice not only will you avoid the potential toxicity of coffee with honey, but also lower the chances of melting away some beneficial honey compounds.

As I mentioned HMF is also detectible in other sugar syrups and sauces that are often used with coffee. Therefore honey isn’t the only sweetener that might be adding to your HMF intake.

Overall, if you start reading many scientific papers in search of the healthiest foods and drinks, you will most likely realize that more than 90% of the foods you consume are toxic in some way. Please, don’t panic and overanalyze your food choices as that’s quite exhausting. Instead, try to have a well-balanced moderate diet and opt for the healthier version of the product you consume when possible.

How to properly make it?

If you’re only concerned about the coffee’s taste, as I mentioned, adding honey to it will result in a well-balanced sweet taste. You can experiment with the amount you put to figure out how much is just enough. You can add it to your cup of coffee right after it’s done brewing if you only care about the taste.

Nevertheless, if you want to take into consideration my in-depth research, you shouldn’t add it to the coffee while it’s still hot.

You should instead follow my advice on how to make coffee with honey the right way:

You might as well make an iced black coffee sweetened with honey. With iced coffees it’s easier to follow the ‘rule’ not to add it to a liquid that’s too hot.

Nevertheless, in order to have it well dissolved, you need to add the honey to lukewarm coffee or milk, even if you’re making an iced drink.

On the photo below you can see an iced black coffee that I sweetened with honey and a bit of cinnamon. 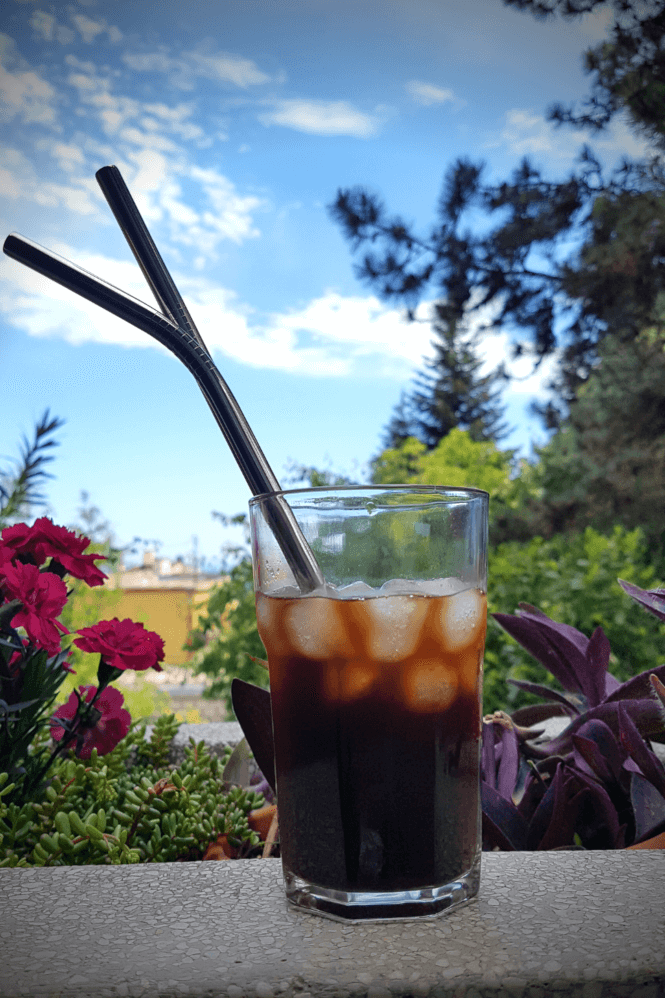 I made it in a French Press and waited for a while for it to cool off until it got to a temperature that’s a bit above room temperature. Then I added a full teaspoon of honey, a quarter of teaspoon of cinnamon, stirred up, and poured over ice. This drink contains around 25 kcal, so in case you don’t like black coffee, and you want to make a flavorful drink with fewer calories – try this iced version out.

I’ve put in a lot of effort to give you proper information and educate you a bit about sweetening a coffee with honey.

While doing my research I discovered quite a lot and changed some of my habits. For example, I’m no longer placing honey on the bottom of my cup and then pouring hot espresso over it. Neither am I adding it to a cup of boiling hot tea.

Nevertheless raw honey is still on top of my sweeteners list.

Have you learned something new by reading this article?