Cold brewing has quite a few alleged advantages over other coffee brewing methods.

One of those advantages, proclaimed by its loyal fans, is that cold brew coffee contains more caffeine than regular coffee, brewed with hot water. But is this actually true?

Is a cup of cold brew always stronger than a cup of ordinary iced coffee?

In this post I’ll give you all the answers, so keep reading!

Does Cold Brew Have More Caffeine?

That’s why, when you brew coffee with cold water you need to steep the grounds for much longer to compensate for the lack of optimal extraction temperature.

Having said that, cold brew is usually made as a concentrate with a higher coffee-to-water ratio compared to hot brew (often, more than 2 times higher).

That’s why cold brew concentrate is diluted with water before being served.

With that being said, if you brew a batch of hot brew and a batch of cold brew, and you use the exact same grind size and coffee-to-water ratio for the making of both of them, there won’t be a significant difference between their caffeine content. There are some scientific reports that also confirm that.

Nevertheless, there is a significant dissimilarity between the amounts of ground beans that are used for the making of regular coffee and cold brew coffee.

By doing so I get a cold brew concentrate which I dilute with water in a 1:1 ratio (equal parts of cold brew and water).

At Starbucks, they use pretty much the same as the aforementioned coffee-to-water ratios for, respectively, hot and cold brew. 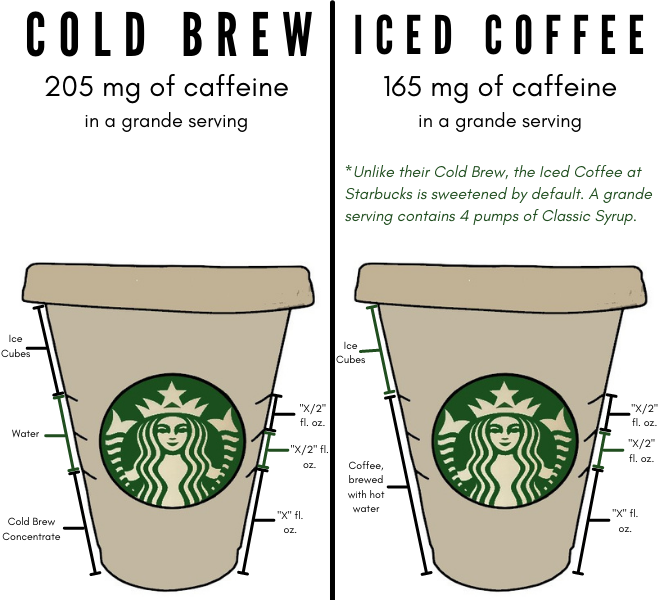 The 50% dilution with water isn’t enough to compensate for the 2.6 times higher coffee-to-water ratio used in the making of their cold brew concentrate.

So, as with all types of coffee, the strength of cold brew largely depends on the amount of ground beans that you use in the making of a batch.

Author’s Note: Did you know that you can use cold brew concentrate to prepare a cup of hot coffee? Visit the link to learn more!

When it comes to strongly-caffeinated coffee, many people believe that nothing can beat espresso. To be fair, they aren’t that far from the truth.

But does a shot of espresso contain more caffeine than a cup of cold brew?

According to this scientific report, 100 milliliters (3.4 fl. oz.) of espresso contain 253.4 mg of caffeine (average value).

On the other hand, 100 milliliters (3.4 fl. oz.) of cold brew coffee contain only 85 milligrams of caffeine (on average). 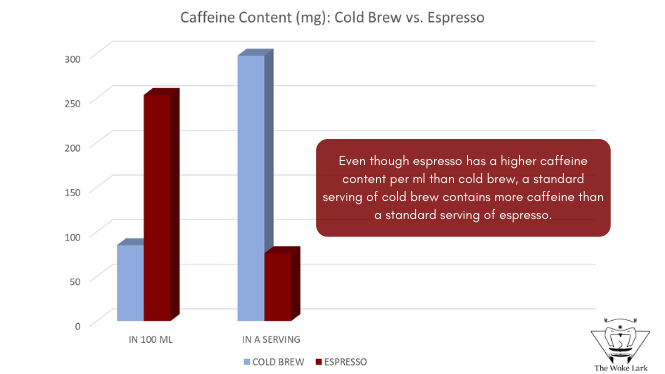 So we should always take into consideration the standard serving sizes of the coffee drinks we compare, in order to determine which one practically contains more caffeine.

Iced lattes are made with espresso, but they’re often less caffeinated than a serving of cold brew.

At Starbucks, a grande iced latte is made with 2 espresso shots and contains 150 mg of caffeine, so the espresso shots can’t beat the strength of the cold brew.

With that being said, some coffee shops may use other cold brew recipes that result in a less-caffeinated cup of coffee.

Even though most coffee shops don’t have the caffeine content of their drinks listed, you can always ask the barista to shed some light on the approximate strength of the drink that you’re ordering.

Whether cold brew contains more or less caffeine than hot brew depends on many factors. Some of them are:

With that being said, more often than not, a cup of cold brew is stronger than a cup of iced coffee, drip coffee, or a shot of espresso.

So whenever you order one at your favorite coffee shop, don’t be surprised if it makes you a bit jittery.