Undeniably there is a huge variety of caffeinated drinks.

They all compete against each other for your attention and now on the battlefield are the Frappuccino versus the cappuccino.

There are quite a few dissimilarities that these two have, compared to one another.

I’m about to answer the most common questions related to the differences between the cappuccino and the Frappuccino.

Which one of them is stronger?

Are they both espresso-based drinks?

Is there a hot Frappuccino or an iced cappuccino?

Are those popular beverages always made with coffee?

What is so special about them and could you find a true Frappuccino or a cappuccino only at Starbucks?

Let’s stop wasting any more time and get to the point.

Frappuccino versus Cappuccino – What Keeps them Apart?

There isn’t just one difference between a cappuccino and a Frappuccino.

There are quite a few, so once you figure them out you will tell those drinks apart with ease.

So here is the Frappuccino vs. cappuccino comparison:

Cappuccino is an espresso-based Italian hot drink that’s usually made with 1 shot of espresso and equal amounts of milk microfoam and steamed milk.

“Frappuccino” is a trademark of a cold beverage, acquired by Starbucks, and it’s essentially made with a mix of coffee, milk, sugar, and ice, all gone through a blender.

To this date, there is a large variety of Frappuccino drinks, including some that contain no espresso or any other type of coffee whatsoever.

Therefore the difference between Frappuccino and cappuccino lays not only in their temperature but also in their size, ingredients, calories, and caffeine content.

Here is an example of the visual difference: 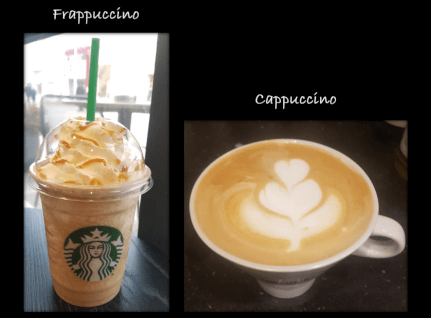 More often than not, the Frappuccino is topped off with whipped cream and other toppings such as mocha drizzle and chocolate curls.

Here in the following photo, you can see a tall Caramel Frappuccino with some whipped cream and caramel drizzle on top: 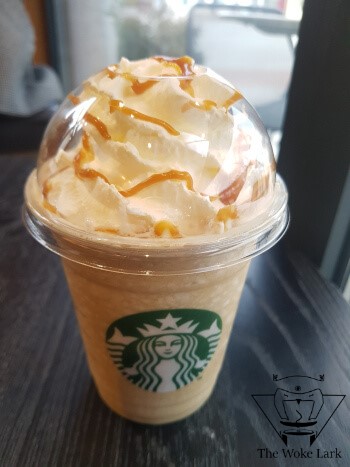 They usually contain a thickening agent, such as xanthan gum, that makes them more viscous, even if made with, say, nonfat milk.

There are a lot of different Frappuccino drinks, made with differently flavored syrups and Starbucks sauces.

You can tweak the original recipe of each beverage on the Starbucks menu.

The number of combinations you can make seems endless.

You can find diversity when it comes to a Frappuccino’s milk component too – usually, it’s whole, but you can have it skimmed, plant-based, or even substitute it with heavy cream.

Generally, when it comes to the cappuccino there isn’t that much that you can alter.

Of course, you can go for a decaf cappuccino, or for one, made with plant-based milk.

Other than that, the variety can only be found in the looks of these espresso-based drinks.

This colorful cappuccino that you can see in the photo below is a great example: 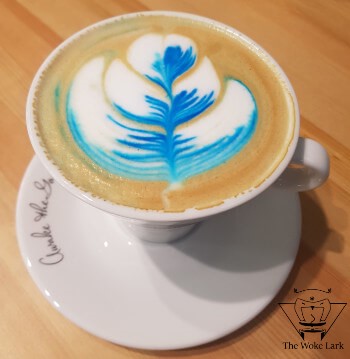 Some would argue that cappuccinos aren’t usually made with latte art on top. Nevertheless, in many cafes and coffee shops they are. I don’t really see why latte art should only be made on lattes…

Shouldn’t they both contain espresso?

Those two drinks are unlike in nature in many ways.

A true cappuccino is made with an espresso shot coming out of the machine hot.

When added to the chilling Frappuccino the hot coffee melts the blended ice and changes the drink’s texture and overall mouthfeel.

That’s why Starbucks came up with the Frappuccino roast (also known as Frap Roast), which is basically instant coffee powder, specially made for this cold drink.

This powder is mixed with water, creating a strong and quite bitter coffee liquid.

However, when added to the other ingredients, it compliments all the other flavors nicely.

Each Frappuccino contains a certain number of Frap roast pumps.

For example, in a Venti cup, you usually get 4 pumps in the beverage.

You can always ask for fewer or more pumps, or to have them substituted with an espresso shot or two, which would alter the Frappuccino viscosity and taste.

It will be a bit sweeter, you won’t feel quite as much bitterness and it will go through the straw easier.

Some options on the menu contain both espresso and Frap Roast, such as the Espresso Frappuccino. The latter is one of the strongest drinks at Starbucks in terms of caffeine.

What you should have in mind is that you can always alter your beverage’s components at Starbucks, so feel free to do so if you have any preferences.

Just know that if you want a decaf Frappuccino – it should be made with decaffeinated espresso, as there is no such thing as a decaf Frap Roast.

If you want to avoid caffeine, just order a drink from the Creme Frappuccino, not the Coffee Frappuccino line, as the Frappuccinos from the latter always have coffee in them.

It’s good to know which one – a cappuccino or a Starbucks Frappuccino is stronger.

The latter contains no coffee whatsoever. For example, the Strawberry and the Vanilla Bean Crème Frappuccinos have no coffee in them, so you won’t have to worry about jitters if you pick on one of those drinks.

If you go for something from the coffee line, you will more likely end up with a drink with a higher caffeine content than a standard cappuccino.

An espresso shot usually contains around 65 mg to 70 mg of caffeine.

A cappuccino is generally prepared with just one of those.

The caffeine content in a Frappuccino varies between 65 mg and 185 mg.

It depends on the number of Frap roast pumps, espresso shots added, and the cup size you’ve chosen.

But it’s safe to say that if you usually go for a Grande, and don’t make any adjustments to the original recipe, you will end up with a Frappuccino that has more caffeine than a standard cappuccino.

What about an Iced Cappuccino?

Starbucks used to offer something called an Iced Cappuccino.

It had a bit more in common with the Frappuccino because, as you may have guessed, it’s cold.

It was made with milk, mixed with 1 to 2 shots of espresso, ice and topped off with cold milk foam.

Unlike the Frappuccino, the iced cappuccino didn’t go through a blender, it was always made with espresso, not Frap Roast.

The Iced Cappuccino isn’t as sweet and it’s a great alternative for those of you who are looking for a simple cold coffee during the summer.

Same as regular cappuccinos, you could find iced cappuccinos made in other cafès, coffee shops, restaurants, etc.

At some places, they do froth the milk by using the steam wand and add hot foam on top of the iced cappuccino.

With that being said, iced cappuccinos are rarely offered at coffee shops and cafès. So I recommend ordering an iced latte instead, as it’s a perfect alternative, made with milk, espresso shot, and ice cubes.

Frappuccinos, on the other hand, you can only find at Starbucks.

There isn’t such thing as hot Frappuccino, as its name comes from the word frappè, which in French means “chilled” or “iced” (when describing a drink).

If you’re looking for a hot Frappuccino alternative I would say that ordering a mocha or a flavored macchiato are both safe picks.

Which one to choose?

I guess it won’t be hard for most of you to choose one or the other.

Deciding whether to order a Frappuccino or a cappuccino should be easy knowing that they’re fundamentally different.

To make it even more unchallenging, I would say that if you are looking for a classic espresso drink that will give you the caffeine kick and won’t add much to your daily calorie intake – go for a cappuccino.

The Coffee Frappuccino is a great option when looking for a refreshing and sweet frozen caffeinated.

I have quite a few Copycat Starbucks Frappuccino coffee recipes, published here on The Woke Lark, and here are a few of them:

It can also serve you as a dessert on the go.

The iced cappuccino (or if not available – the iced latte) is also a perfect alternative when opting for a simple cold espresso drink.

For now, the Frappuccino vs cappuccino battle ends with a tie (even though I’m more of a fan of the latter).

Which one suits your taste better? Let me know in the comments below.