Italians are great at making delicious coffee-based desserts and you’ve most likely heard of at least one of them. But do you know what is an ‘affogato’? Actually, there are two widely spread definitions: a classic and a Starbucks one. In this Woke Lark guide, I will describe both. After you finish this article, you’ll know what this espresso treat actually is and how to make it. You’ll also find out what you’ll get if you order an affogato al caffè at a restaurant in Italy or a grande latte affogato at Starbucks.

Without further ado, let’s dive in.

What is an affogato: Classic Definition

’Affogato’ means ‘drowned’ in Italian and is the name of an espresso-based dessert.

An affogato is made by pouring an espresso shot over a ball of ice cream (usually vanilla gelato). It may sometimes contain a shot of liqueur, such as Frangelico, Baileys, or amaretto. The classic affogato is usually served in a glass with a teaspoon. 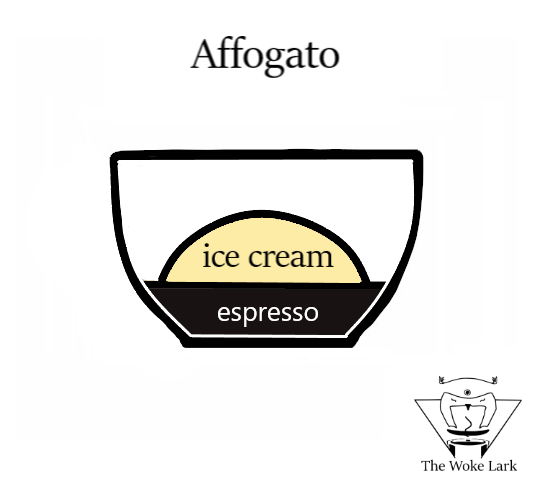 In Italy, it’s often called ‘affogato al caffè’ which means ‘drowned in coffee’, as the ice cream is figuratively drowned in the espresso shot.

I know there are quite a few people who wonder how to eat this dessert. They get confused about whether it’s appropriate to take a sip of the espresso or wait for the gelato to melt.

Here’s how to eat an affogato:

As you see this Italian treat is quite easy to make and I can assure you – it tastes so good!

In the following photo, you’ll find the affogato al caffè I made at home by simply pouring espresso over a scoop of Stracciatella gelato. 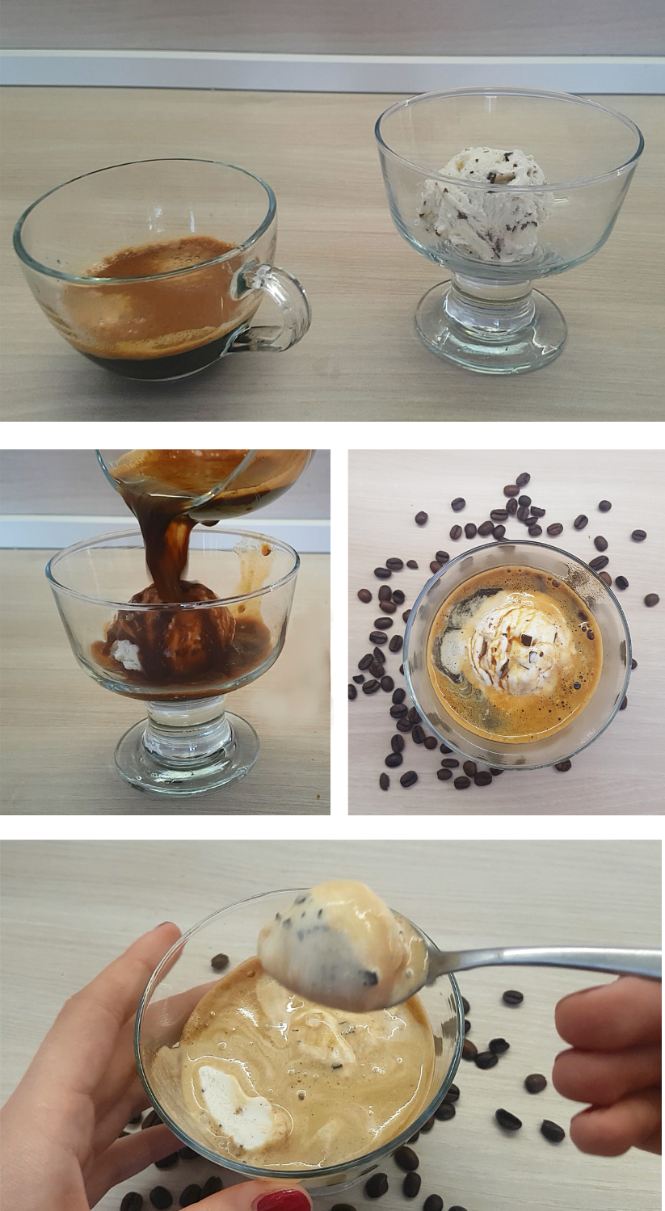 This is my favorite affogato version, as the chocolate shavings in the Stracciatella take this classic Italian dessert to the next level (at least according to my taste).

I recommend trying this simple recipe out!

Affogato coffee desserts are usually served after lunch or dinner.

They’re the easiest way to make your guests happy after a meal.

To spice things up you can add a shot (1 fl. oz or 30 ml) of Baileys or Frangelico (an Italian hazelnut liqueur).

Now that we’ve defined the classic affogato let’s move on to the Starbucks definition.

What is an Affogato shot at Starbucks?

At some Starbucks Reserve locations, you can order a version of the aforementioned traditional affogato.

Nevertheless, that’s more of an exception and if you hear someone say this Italian word, they most likely mean something else.

Here’s what is ‘affogato’ at Starbucks:

At Starbucks the word ‘affogato’ is often used to describe the way the espresso shot is added to the drink. An affogato style shot is basically an espresso shot poured last or on top of something.

For example, if you order a tall latte affogato, instead of adding the shot of espresso to the cup first, and then add the milk, the barista will first add the milk and then pour the espresso shot on top of it.

Furthermore, if you order an Affogato Frappuccino, the barista will pour a shot of espresso on top of your iced blended drink which results in a cool ombre effect.

At some places, they even pour the shot on top of the whipped cream.

They’re in a way drowning the other components of your drink in espresso.

That’s what stands behind the coffee affogato at Starbucks.

How to pronounce it

No matter whether you’re at a café in Italy or at Starbucks, it might be a bit intimidating to order this type of dessert/espresso drink if you don’t know how to pronounce its name.

So here’s how ‘affogato’ is pronounced:

In English affogato is pronounced |afəˈgɑːtəʊ|.

If you’re in Italy or you just want to sound more sophisticated while ordering your drink at Starbucks, say it as Italians do:

Now that you know what’s an affogato, go ahead and order one at an Italian restaurant or make it yourself at home.

It’s a truly delicious yet simple dessert that you should definitely try out.

On the other hand, you can go to a Starbucks caffè and order a drink with an affogato-style espresso shot added to it.

It may become your go-to.

In many of my Woke Lark recipes, I add the espresso last, as the caffeinated beverage looks much cooler when made that way.

Anyway, I hope you found my post useful. Drop me a comment below if you have any questions.