Have you ever wondered which coffee has the most caffeine? In this post, I’ll shed some light on this topic and provide the answers to the most common related questions.

Does the strength of your coffee depend on the roast profile of the beans you use?

If so, which one is the strongest – a light, a medium, or a dark roast?

What about the type of coffee beans – are Arabica beans more caffeinated than Robusta beans, or is it the other way around?

Does the coffee brewing method have an impact on the strength of your brew?

Does it matter if you use a French press, a pour-over dripper, an AeroPress, or you’re making a batch of cold brew?

Are there brands that exclusively sell highly caffeinated coffee?

What about your coffee drink of choice? Is it as caffeinated as you think it is? Could it be the reason why you mistakenly believe that coffee doesn’t affect you?

If you’re looking for a way to get the most caffeine out of your beans, then you’ll definitely find this post helpful.

Knowing what’s the strongest type of coffee is also essential to anyone who wants to manage their daily caffeine intake.

So without further ado, let’s dive in.

Which Coffee Has The Most Caffeine: Type, Roast and Brewing Method Explored

The amount of caffeine your cup of coffee contains depends on several things, the most important of which are:

You can always maximize the caffeine extraction by grinding your coffee beans as fine as possible, by increasing the coffee-to-water ratio, by extending the period of steeping, or by brewing with higher temperature water.

The average serving size of a certain type of coffee drink should also be taken into consideration. Naturally, the larger the size of your coffee beverage, the stronger the caffeine kick.

In this post, I will focus on a few of the main variables that are to be considered – the type of coffee beans, the roast, and the brewing method.

If you’re wondering which coffee has the most caffeine, and you’re looking for a brief answer, here it is:

It’s safe to say, that the coffee that has the most caffeine per fluid ounce is espresso, made with dark roast Robusta coffee beans.

If we are to include the coffee drink’s average serving size into the equation, then we could say that the strongest type of coffee is cold brew coffee, made with dark roast Robusta coffee beans.

This was the short answer, but it doesn’t give you the whole picture.

If you want to get a better understanding of how the coffee roast, the brewing method, and the type of beans influence the amount of caffeine your cup of Joe contains, then continue reading.

Caffeine is a stable compound and it isn’t highly affected by the roasting process.

A coffee bean would lose an insignificant portion of its caffeine even if exposed to high temperatures.

So if we measure the caffeine levels of the same coffee bean when it’s roasted light, medium, and dark, we’ll find that the difference between the caffeine values is, in fact, negligible.

With that being said, when roasted, the coffee bean loses some of its moisture and becomes less dense.

In other words, it loses some of its mass.

In the same way, 10 grams of raisins would contain more sugar than 10 grams of grapes. It makes sense, right?

On the other hand, when you roast coffee beans, they expand, so their volume increases.

The lighter the roast, the more compact the coffee bean would be.

Therefore, if you’re wondering what coffee has the most caffeine, based on the roast profile, you should know that it depends on the way you measure your grounds to prepare a cup of Joe.

If you prepare your coffee by precisely weighing the ground beans with a coffee scale, then dark roast coffee would always be more caffeinated than coffee, made with a medium or a light roast.

If you measure your coffee beans by volume (i.e., tablespoons or scoops), the light roast may contain more caffeine.

Most online sources suggest that if you measure your grounds by volume, then the light roast brew is always going to be more caffeinated.

Nevertheless, during my research, I came across a few scientific reports that suggest that even if you use volumetric measurements, the final brew, made with a dark roast, would have more caffeine than the one, made with a light roast.

Therefore, we could say that, generally, coffee, prepared with a dark roast, contains more caffeine than coffee, made with a light roast.

For example, here’s the comparison between the caffeine content of 8 ounces (240 milliliters) of coffee, made with a dark and a light roast, according to this scientific report:

As you can see, even when measured by volume, the coffee, prepared with darkly roasted coffee beans is still more caffeinated.

With that being said, there’s a much bigger difference between the dark and light roast caffeine values, when the cup of coffee is prepared by weight.

Which type of coffee is more caffeinated: Arabica or Robusta? 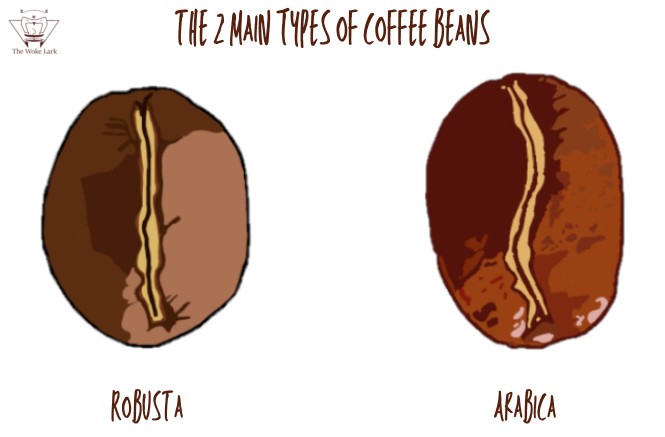 The coffee beans that you use to prepare your morning cup of Joe, are actually the seeds of a plant, called the Coffea plant.

There are two most commercially important Coffea species – Coffea arabica and Coffea canephora. You’ve most likely seen or heard their common names – Arabica and Robusta.

But which one of them is more caffeinated?

So if your main goal is to make a stronger cup, then you should use Robusta coffee.

With that being said, the beans that come from the Coffea arabica plant are usually of higher quality.

Even though Robusta coffee has a higher caffeine content, you can rarely find this type of coffee beans in specialty coffee shops.

If you want to find out what’s the difference between Arabica and Robusta, and why the former is usually preferred by passionate coffee enthusiasts, visit this post. There you will find a beginner-friendly guide on the different types of coffee beans.

Which Coffee Brewing Method Yields the Most Caffeinated Cup?

This is so, because the caffeine content of your cup depends on the way the coffee was extracted.

In the following infographic, you can check out a comparison chart between the caffeine content in 100 milliliters (~3.4 fl. oz.) of coffee, made through the use of different coffee brewing methods.

I got the data you see above from this article. These are mean caffeine values that are based on several scientific reports (all cited in the aforementioned article).

As you see, espresso is the coffee brewing method that extracts the most caffeine out of the coffee beans. The second most caffeinated type of coffee is Turkish coffee, while the third – Moka pot coffee.

With that being said, we do need to take into consideration the average serving sizes of the aforementioned drinks.

Even though espresso is the strongest in terms of caffeine, an espresso shot is usually around 1 fl. oz. (30 milliliters).

This means that a single espresso shot would contain around 76 mg. of caffeine.

Comparatively, a Moka pot serving is usually around 2 fl. oz. (50 to 60 milliliters), which means that it would contain 91.44 mg. of caffeine.

A regular serving of cold brew coffee is at least 8 fl. oz. (240 milliliters), so the amount of caffeine it has would be around 204 milligrams.

So even though espresso is the type of coffee that has the highest caffeine concentration, a serving of cold brew is usually stronger in terms of caffeine.

Based on the data from the aforementioned scientific article, presented in the previous chart, I made an approximate estimation of the amount of caffeine a regular serving of coffee contains, depending on the coffee brewing method.

With that being said, if you’re at a coffee shop and you want to have the most caffeinated type of coffee drink, then you can always order an espresso-based beverage, such as an americano or a caffè latte and ask the barista to add an extra espresso shot or two.

If you need an extra caffeine kick, you could also ask for a large cup of cold brew.

Keep in mind, though, that you shouldn’t go overboard with the amount of caffeine you consume.

According to the FDA, you shouldn’t consume more than 400 mg of caffeine per day, even if you’re perfectly healthy.

To provide you with some context, a Venti (20 fl. oz., 590 ml.) serving of Blonde Roast brewed coffee at Starbucks contains 475 milligrams of caffeine.

If you want to find out what are the strongest coffee drinks at Starbucks, visit this post.

There are, in fact, brands that are marketed towards coffee lovers, who’re interested in having the most caffeinated type of coffee.

Here are three of the most popular ones:

To be fair, if you’re looking for the most caffeinated type of coffee, I recommend sticking to darkly roasted Robusta coffee beans.

You don’t really need to buy a bag that says that you’re getting the strongest coffee in the world.

I’m sure that the aforementioned brands sell highly caffeinated coffee, but I’m also convinced that there are other more affordable alternatives that will still let you have just as a caffeinated cup of coffee.

Now that you’ve read this post, you know which is the coffee type, roast, and brewing method that will let you enjoy the most caffeinated cup of coffee.

I hope that you found the information that I shared useful and that you learned something new.

1 thought on “Which Coffee Has The Most Caffeine: Explained”