Us coffee lovers should be aware that the active compound in our favorite beverage has been associated with disrupted sleep, especially if consumed in excess or too late in the day.

That’s why it’s essential to be aware of how long caffeine lasts to avoid it from keeping you awake when you should be getting a good night’s rest.

Chronic sleep deprivation is linked to a number of negative side effects, such as induced fatigue, mood changes, and impairment in cognitive performance.

Since insuficient sleep often leads to an increased food intake it also contributes to weight gain. Therefore sleep deprived individuals are at higher risk of obesity.

Knowing how long caffeine keeps you awake and understanding its overall effects on your system will let you take advantage of the benefits of coffee consumption and minimize the associated drawbacks.

In this article, we’ll go over some key discussion points, related to the topic:

So let’s dive in!

To better understand how caffeine works, we first need to introduce another compound – adenosine.

Adenosine is a neurotransmitter that accumulates in our bodies throughout the day. Once adenosine binds to its receptors, our neural activity slows down and we start feeling sleepy.

Adenosine levels rise with each hour when we’re awake, and decrease during the sleep recovery period.

Caffeine is a bioactive compound that is a competitive antagonist at adenosine receptors.

Therefore, caffeine blocks adenosine from binding to its receptors in our brains.

The ingested caffeine from coffee or tea settles in the adenosine receptors instead of adenosine. 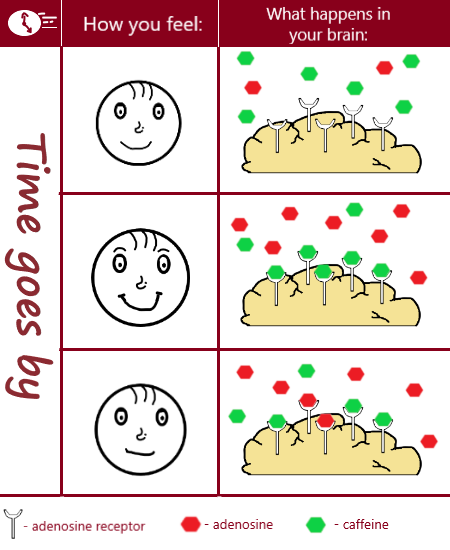 Consequently, it energizes us, keeps us awake, and improves our cognitive performance. And since adenosine neurotransmitters are blocked, they don’t get to send their signals to our brains. As a result, we don’t feel tired.

Furthermore, some studies suggest that caffeine increases dopamine levels in our brains.

Along with its positive effects, caffeine consumption has been associated with increased blood pressure and heart rate.

It may also cause a jittery sensation and increased anxiety levels.

These undesired effects are more pronounced in individuals who are more sensitive to caffeine. One may also experience negative side effects when the stimulant is consumed in excess.

According to the FDA a healthy individual shouldn’t consume more than 400 mg of caffeine per day. That’s about four or five cups of coffee.

Check out my post where I unravel which coffee has the most caffeine to find out more about your cup’s caffeine content.

It’s also worth noting that the healthy amount of caffeine varies depending on your health condition and caffeine sensitivity. But more on that later.

Needless to say, having too much coffee, or drinking a caffeinated beverage soon before you go to bed can disrupt your sleep. And I’m sure you don’t want that. So let’s move on to the main subject of this post.

How Long Does Caffeine Last?

How long it takes for caffeine to kick in and how long it lasts in your system depends on various individual factors.

These include your genetics and the rate at which you metabolize caffeine, as well as your current health condition, the medication you’re taking, whether you smoke or not, etc.

Peak caffeine concentrations in plasma occur between 15 and 120 minutes after oral ingestion.

You’ll experience the effects of the stimulant to the fullest from 15 minutes to 2 hours after you’ve had coffee or another caffeinated beverage.

Even though caffeine metabolism varies among different people, in most individuals it takes around 15 to 30 minutes for caffeine to kick in and reach its peak concentrations.

But how long does caffeine last in your system?

Needless to say, drinking coffee or another caffeinated drink before bedtime will undoubtedly cause sleep disturbances.

Even if you’re able to fall asleep shortly after you’ve had a cup of coffee, the stimulant would shorten the deep-sleep phases of your sleep cycle. This would lead to poorer sleep quality.

To minimize such negative effects experts suggest avoiding caffeine after lunchtime or at least 6 hours before bedtime.

Nevertheless, it’s worth noting that some individuals who metabolize caffeine at a slower rate may have a hard time falling asleep even 10 hours after caffeine consumption.

Furthermore, according to this scientific report, caffeine disrupts sleep even if consumed 6 hours before bedtime.

So if you’re keen on having a good night’s sleep, stick to drinking coffee only in the morning.

You can have your afternoon cup substituted with decaf, or some less intense alternatives such as half-caff coffee, green tea, or matcha.

There is evidence that genetics play a role in the way a person metabolises caffeine.

Slow caffeine metabolizers are more sensitive to its effects. Furthermore, caffeine lasts longer in such individuals.

Genetics aside, other factors do influence caffeine metabolism as well.

For example, pregnant women metabolise caffeine at a slower rate. That’s why the permissable daily dose of caffeine during pregnancy is 200 mg instead of 400 mg.

Taking medicines, such as contraceptives also slows down caffeine metabolism.

Slow caffeine metabolizers are more prone to experiencing the negative side effects of caffeine consumption.

Such individuals often suffer from increased heart rate, high blood pressure, jitteriness, lightheadedness, and increased anxiety levels after having a cup of coffee.

Caffeine wears off at a slower rate in slow caffeine metabolizers.

Therefore they may have trouble sleeping at night even after having only 100 milligrams of caffeine in the morning.

On the other side, fast caffeine metabolizers would often wonder why coffee doesn’t wake them up or affect them in the way it affects others.

Such individuals would still feel sleepy even after having a strong caffeinated Starbuck beverage, such as a grande Espresso Roast Clover.

Related post: Why Doesn’t Coffee Wake Me Up: Causes & Tips

Caffeine in Tea: Is there a difference?

Because of a naturally occurring amino acid in the tea plant (Camellia sinensis), called L-Theanine, its caffeine affects us differently compared to caffeine in coffee.

This amino acid reduces the risks of increased blood pressure after you have a cup of matcha or green tea.

Furthermore, since it alters the way caffeine works on us, it gives us a smoother caffeine kick, without the unpleasant jitteriness. It takes the same time for caffeine from tea and coffee to wear off.

But because of tea’s L-theanine, you may find that having a cup of matcha in the afternoon doesn’t damage your sleep as much as a cup of coffee.

This may be because it’s been suggested that L-Theanine has relaxation effects in humans.

For more insight on the benefits of L-Theanine and the differences between matcha and coffee, check out this detailed comparison guide.

It’s generally considered that consuming caffeine during breastfeeding is safe if you don’t exceed a daily dose of 200 milligrams. Furthermore, you should feed your baby before having your morning cup or at least 4 hours after you’ve had a caffeinated beverage or caffeine-containing food (such as chocolate).

If you don’t do that, you may transfer caffeine through breast milk to your baby.

This may lead to undesired consequences. For example, maternal chocolate and coffee consumption has been associated with increased infant colic.

Caffeine Withdrawal and How Long it Lasts

There are many reasons why a person would want to quit caffeine.

You may have built up caffeine tolerance, and you want to quit cold turkey to be able to experience the effects of caffeine again.

Or you just don’t like the fact that you’re addicted to a substance without which you aren’t able to function properly.

No matter your motivation, you should be aware that quitting caffeine will most likely cause unpleasant withdrawal symptoms, such as headache, bad mood, nausea, hard concentration, etc.

According to this scientific report, caffeine withdrawal symptoms start occuring 12-24 hours after abstinence. They reach their peak in 20 to 51 hours.

So how long does caffeine withdrawal last?

Caffeine withdrawal lasts between 2 and 9 days. Its exact duration and the intensity of the symptoms depend on individual factors, such as the amount of caffeine your body is used to.

It’s hard to determine exactly how long caffeine lasts in your system, as we need to take a lot of variables into consideration.

Nevertheless, I hope that you found my article useful.

Its purpose is to help you learn a bit more about the effects of caffeine on your body.

Furthermore, once you’re aware of the general science-based recommendations, you will likely make a wiser choice when you have the urge to drink a cup of coffee in the late afternoon.

After all, sleep quality is essential, and even if you’re a passionate coffee lover like me, you should prioritize your health.

Feel free to leave me a comment below to share your thoughts or ask me a question!