There are many widely spread coffee facts that we’ve heard of or read about quite a few times, but we never really question their validity. In the process of writing my Woke Lark articles, I always search for scientific proof that can back up the information that I share with you. So I decided to include this post and share my findings on cold brew acidity. You’ve most likely heard that cold brew coffee is significantly less acidic. But is there evidence that it is, in fact, a better alternative for coffee lovers with more sensitive stomachs? What’s the actual pH of cold brew coffee and are its acidity levels lower than those of hot brew?

Let’s check out all the answers, as they might surprise you.

Cold brew coffee is very popular and its consumption has been increasing for the last couple of years.

It isn’t only famous for its smooth satisfying taste, but according to a Toddy self-funded study, cold brew coffee is 67% less acidic.

If you aren’t aware, Toddy is actually the brand name of a cold brewing system (you can check it out on Amazon by clicking here). Their study is often cited when cold brew coffee enthusiasts point out their favorite brewing method’s benefits. Nevertheless, it’s safe to say that this study is rather biased and the impressive difference in the acidity of hot and cold brew coffees may not be as big as we’d like to believe it is.

During my research, I found that there aren’t a lot of unbiased studies that examine the acidity of cold brew coffee.

Nevertheless, there are some that give better insight into the difference between hot and cold brew and I will use the data they provide in this article.

In this study that investigates the acidity and antioxidant activity of hot and cold brew coffee the scientists used the same coffee-to-water ratio for both brewing methods.

In another scientific report by the same authors is stated that the concentrations of 3-chlorogenic acid and pH are comparable between hot and cold brew.

So if you’re in search of a less acidic alternative to regular hot brewed coffee because you have heartburn or acid reflux, cold brew might not be a better alternative.

However, there is anecdotal evidence that people who suffer from such indispositions feel much better after switching to cold brew. This might be explained by the fact that cold brew contains crude polysaccharides that may decrease the negative effects of coffee’s acidity.

Nevertheless, foods and beverages don’t affect different individuals the same way, so it wouldn’t be wise to say that cold brewing is an overall better alternative for people with heartburn symptoms.

When it comes to taste, it’s worth mentioning that many coffee enthusiasts prefer their coffee crisp and juicy, or in other words, pleasantly acidic. Still, acidic flavor notes may also be unpleasant to some. So there are many coffee consumers who tend to avoid them in their cup of Joe, which is one of the reasons why cold brewing is gaining more and more followers.

Not only does it result in a rich cup with enhanced natural sweetness, but the bitterness and the overall perceived acidity are notably decreased compared to brewing with hot water.

Not to mention that the oxidation and degradation of coffee molecules are slowed down when coffee is brewed with cold water. This means that it won’t go bad as quickly and you can store it in the fridge in a container for up to two weeks.

It will still taste good even 10 days after you’ve cold-brewed your batch, which is definitely an advantage. 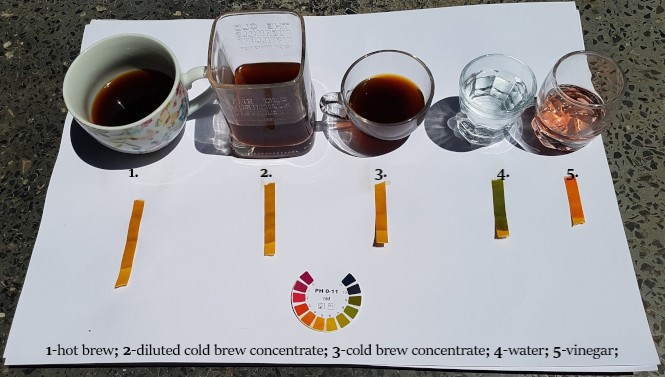 After doing my research and realizing that cold brew’s acidity levels are comparable to those of regular coffee brewed with hot water, I decided to make an experiment at home and try to prove it myself.

The studies I mentioned above use the same coffee-to-water ratio.

Nevertheless, we know that cold brew is usually made with more coffee compared to hot brew.

So I decided to make a batch of cold brew coffee with my usual ratio of 1:6 and French press coffee brewed with hot water (1:16 ratio). 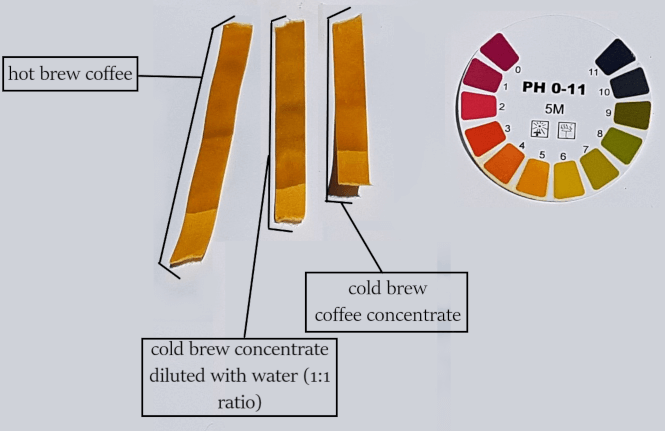 As you can see in the photo above they all have similar pH values of around 5.

But when comparing the strips of hot brewed French press coffee and the cold brew diluted concentrate they appear identical.

I later pulled an espresso shot with a pressurized portafilter and the color of the litmus paper after dipping it in the espresso was the same as the one of the diluted cold brew concentrate.

Of course, I wouldn’t claim this improvised home study to be considered as solid proof that cold brew isn’t less acidic. After all, I’m not a chemist or a scientist.

Nevertheless, you can try out this experiment at home to see the difference in the pH values between coffees made with different brewing methods or with different beans and roast profiles.

I find such home tests not only entertaining but also educating in a way because they give me a better understanding of coffee nature in general.

Now that you know that cold brew and hot brew have similar acidity levels, you can try lowering your coffee’s acidity by making other adjustments.

For example, you can always stick to dark roasts, as they are usually less acidic than light roasts. Generally, darkly roasted coffee beans are also less caffeinated, so they might as well be a better option for coffee consumers who suffer from acid reflux (because caffeine has been linked to GERD symptoms aggravation in some people).

With all being said, if you’re aiming for a cup of coffee that tastes less acidic, cold brew is definitely a great solution. The flavor profile of cold-brewed coffee is often completely different than the same made with hot water.

If cold brew suits your taste better – stick to it.

But don’t be misled into thinking that its pH values are much higher than those of hot brew.

I hope you found some useful information in this Woke Lark article. Please, drop me a comment below to share your thoughts.

Matcha vs. Coffee – The Ultimate Comparison

As someone that suffers with Interstitial Cystitisif I drink coffee I will have a flare of horrible symptoms for 24/48 hours about three hours after I finish a coffee… it doesn’t matter how much milk I try and add to lessen the impact on my bladder. However….. I can drink the Starbucks cold brew.. while at home I drink a no acid coffee I can order through Amazon. But as far as the cold brew coffee there is absolutely no way it is not less acidic then regular coffee… 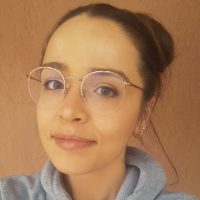