I understand that it may be a bit intimidating to order something at a coffee shop; especially if you don’t know much about the beverages listed on the menu.

That’s why I decided to make things a bit easier for you and explain what a breve is.

It’s worth dedicating a whole post to this coffee drink and answer all of the questions that may arise.

What’s a classic breve coffee made of?

Is there an iced version?

If you want to order one – how should you pronounce its name?

Is the caffè breve the same as the breve latte?

Does it have more calories than other classic espresso-based drinks such as the cappuccino?

I will also explain what ‘breve’ means at Starbucks.

Clarifying this definition is necessary because the common interpretation of the word among baristas working for this large coffee chain often causes confusion.

What is a Breve?

Actually, the term ‘breve’ is also used in other fields, such as music and phonics.

However, in this article I’m only going to explain what it means in the world of coffee.

So here’s what a breve is:

A breve is an espresso-based hot coffee drink.

It’s an American take on the Italian cappuccino that is made with half-and-half (a mix of whole milk and cream) instead of milk.

A caffè breve consists of 1 shot of espresso and equal parts of steamed and frothed half-and-half.

Each classic espresso-based drink that has ‘breve’ added to its name, be it a latte, a mocha or a cappuccino, has its milk component replaced with half-and-half.

This makes the beverage richer, more viscous and creamier. 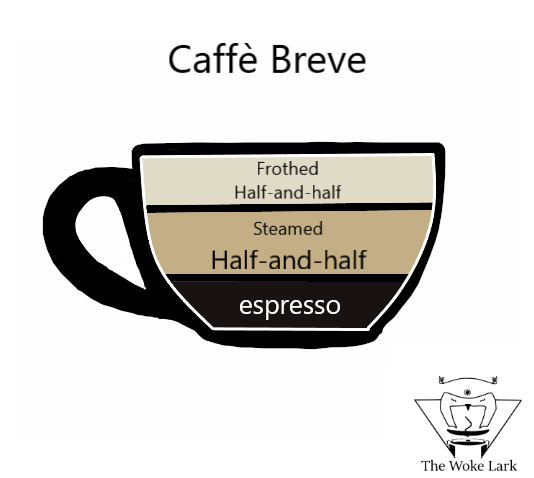 Half-and-half also froths pretty well which makes the breve more enjoyable for those who like a fluffier consistency.

Have in mind though, that it’s not sweetened.

Mainstream coffee chains often use flavored syrups that add sweetness to their breves.

Nevertheless, at classic coffee shops, they don’t add sugar by default, which is why your coffee wouldn’t be as sweet.

At the heart of a classic caffè breve lays the richness, creaminess, and the well-balanced taste of the combination of half-and-half and espresso.

Of course, you can always ask to have your beverage sweetened, but you shouldn’t expect it to be that way if you haven’t told your barista in advance.

You may often come across iced breve lattes that are made by filling a 12 oz. (350 ml) cup with ice cubes, cold half-and-half, and topping off the drink with 1 to 2 shots of espresso.

Of course, the serving sizes vary going from one place to another.

What does ‘breve’ mean at Starbucks?

You’re probably familiar with the fact that Starbucks shops have adopted an unusual terminology for some items on their menu.

This is the reason why people that aren’t regulars, often get confused by the type of drink they get by ordering a breve.

At Starbucks baristas are thought that ‘breve’ means half-and-half.

Of course, at some Starbucks shops, the baristas will understand what’s the drink you’re looking to have and serve you a caffè breve.

Nevertheless, the fact that half-and-half is used interchangeably with the term ‘breve’ has caused a bit of frustration in both customers and baristas quite a few times.

That being said, it’s good to know that each coffee drink that is listed on the Starbucks menu can have its milk substituted with half-and-half.

For example, you could order a White Chocolate Mocha breve or a Caramel Macchiato breve.

In the same way, you could order a Nonfat White Chocolate Mocha that is made with skim milk or an almondmilk Caramel Macchiato.

If you happen to be on a low-carb high-fat diet, you may be interested in checking out my post on the best keto Starbucks drinks and how to order them.

Dutch Bros is a well-established drive-through coffee chain that keeps expanding throughout the United States.

Their reasonable prices and top-notch customer service are valued by many people, which is why the brand has many loyal followers.

However, the large variety of drinks they offer may be a bit confusing for new customers, which is why I decided to include this paragraph and explain what a breve at Dutch Bros is.

All breve drinks at Dutch Bros are made with their Kick Me Mix, which is basically their term for half-and-half.

Such beverages are creamier compared to the other ones made with regular milk.

If you order a skinny version of one of their breve drinks, it will be made with nonfat milk instead.

To make things even easier when ordering, I should advise you that their mochas are made with chocolate milk, and their lattes – with 2% milk.

To boost up your confidence when ordering I also decided to include a segment dedicated to the pronunciation of the word breve:

When referring to the coffee drink, the term ‘breve’ is pronounced bréve – with a pronounced final ‘e’ and a stressed first syllable.

The pronunciation of the word differs when used in different context. For example in music terminology, its final ‘e’ isn’t pronounced.

Many of you may have already guessed that a breve coffee contains more calories than a standard cappuccino or a latte.

This is because it’s made with half-and-half instead of whole milk.

This means that if you have a breve latte instead of your standard caffè latte, the milk component of your drink will contain twice as many calories.

Often iced versions of the breve contain fewer calories, as the cup, in which the milk and cream mix is added, is first filled with ice cubes.

This is why the amount of half-and-half the drink contains is lower.

At some places, they offer a fat-free version of half-and-half which has fewer calories.

The thing is that, more often than not, this type of product contains corn syrup, which makes the drink higher in added sugar.

For this reason, I don’t consider this as a healthier alternative.

I would instead advise you to go for a smaller serving size and enjoy the drink to the fullest.

I hope I managed to answer all of your questions.

The breve is a great coffee drink that has become the go-to for many.

In case you’re interested, you can also check out other drink description posts of mine, such as the following:

Now that you know what a breve is, you can try it out by ordering one at your favorite coffee shop.

If you have any other questions or if you want to share something, please do, by leaving a comment below!

1 thought on “What is a Breve Coffee? – Drink Description”