The time has come to dedicate a whole article to this refreshing beverage.

You may have heard this drink’s name a couple of times before actually asking yourself what a mocha truly is.

What is it made of?

Does it have anything in common with the mochaccino or the latte?

Is “a Mocha” just a fancy way of describing a classic hot chocolate or is it actually made with coffee?

Does it contain espresso?

This popular drink is, in fact, part of the menu of large coffee chains such as Starbucks.

There you can find its iced, skinny, or Frappuccino version.

But what do those drinks have in common?

The term “mocha” is also used to describe sauces, flavors, and even colors.

In this guide, I will give answers to all of the questions related to this drink.

We will discuss the origin of its name and in the end, you will know exactly what a caffè mocha is and why it is so widely spread.

What is a Mocha?

Many coffee places offer mocha latte, but they rarely state what it’s made of.

There is a simple, but an essential ingredient in all drinks that carry this name and it makes them stand out.

Here’s what a Mocha drink is:

It is made with 1 to 2 shots of espresso, steamed milk, and 2 tablespoons of chocolate sauce or syrup or 5 to 8 grams of cocoa/cacao powder.

It’s often topped off with whipped cream, or a thin layer of milk microfoam.

Each coffee drink that has ‘mocha’ added to its name, be it a latte, a frappe, or a macchiato, contains a chocolate component such as syrup, sauce, or cocoa powder.

It wouldn’t be a mocha without chocolate, as this is the ingredient that characterizes the taste of this beverage.

Note that the amount of chocolate powder, sauce, or syrup added to this coffee drink varies from one place to another.

At some places, Mocha drinks are topped off with whipped cream and chocolate syrup or sauce, as seen in photo below: 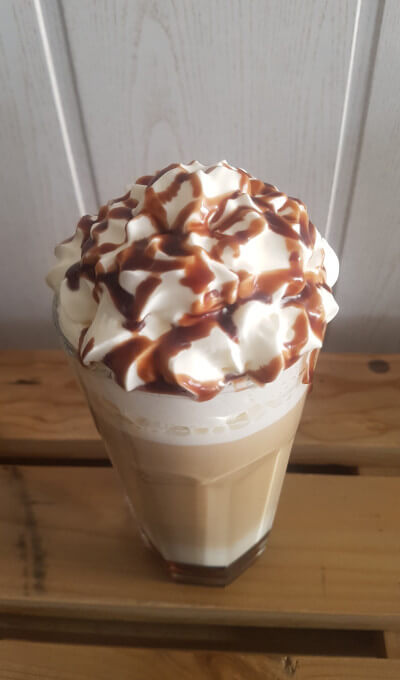 Sometimes the drink is served in large mason jars, so the serving size varies as well – it can reach up to 16 fl. oz. (500 ml).

This is the case with the drink in the photo below: 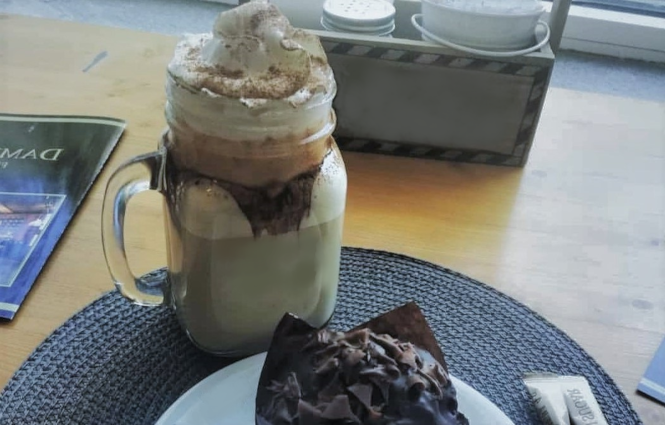 As you can see this one is topped off with some chocolate powder instead of syrup.

To enhance the coffee flavor baristas often add 2 espresso shots instead of just one.

So have in mind that the mocha isn’t just a chocolate-flavored milkshake.

You should be aware that it contains caffeine.

Many cafes offer iced mocha drinks that are made by using cold milk instead.

The espresso is often added last to this type of beverage.

You can see an iced mocha made this way in the following photo: 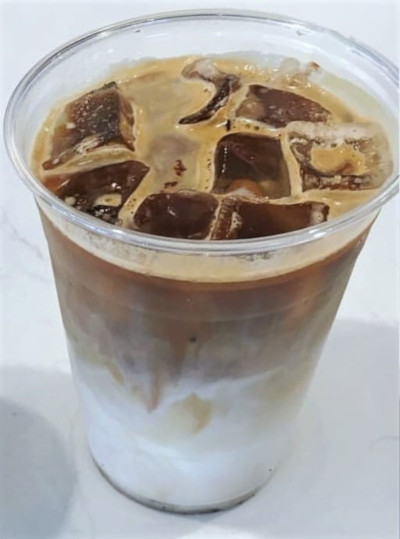 Author’s Note: Did you know that at Starbucks, when the barista adds the espresso shot to the beverage last, they call it an affogato-style shot. To learn more about what’s actually an affogato, check out this post.

You can also come across the mocha breve, which is a creamier version of the same drink, made with half-and-half instead of whole milk.

You can check out my recipe posts where I share with you how you can make a hot or an iced white chocolate mocha at home.

Here’s a photo of the iced white chocolate mocha that you can easily prepare by following my guide:

Often, you will see a mocha listed in a menu as a mocha latte.

Actually, the mocha is made just like the latte, but the latter doesn’t contain a chocolate component.

Nevertheless, they are both espresso-based drinks.

I have a detailed post where I explore the differences between a mocha and a latte.

If you’re interested you can check out their comparison too.

At Starbucks, you can pretty much find all classic espresso-based drinks, and the mocha isn’t an exception.

Of course, the marketing team always tries to add something new to a drink’s recipe to make it stick out a bit more.

There is, in fact, a variety of mocha drinks at Starbucks. For example they have the classic Caffè Mocha, and a seasonal Peppermint Mocha that is the go-to for many people during theholidays.

All mocha drinks contain coffee, milk, and mocha sauce, made with sugar and cocoa powder, which gives a nice chocolate flavor to the drink.

If you get a Skinny Mocha it will be made with nonfat milk.

No matter what’s the drink you go for, the chocolate component is always present in all Starbucks Mochas.

There you can find iced and Frappuccino versions that are perfect if you’re looking for a chilly drink.

At Starbucks, you can also get a White Chocolate Mocha made with their white mocha sauce, which contains sugar and cocoa butter.

Drinks made with this sauce won’t have the signature dark cacao flavor, but you will most probably enjoy their pleasant white chocolate taste.

Most mochas at Starbucks are made with 1 to 2 espresso shots, just like the classic recipe.

Mocha Frappuccinos, are the only ones made with Frappuccino roast, which is basically instant coffee powder.

Overall if you go to Starbucks and you want a chocolate-flavored coffee, be it hot or cold – go for one of the mocha drinks that the famous coffee chain offers.

If you are looking for a coffee-free beverage that resembles a chocolate milkshake – go for their Chocolate Cookie Crumble Crème Frappuccino.

Its caffeinated version is the Mocha Cookie Crumble Frappuccino and you can see a picture of it here: 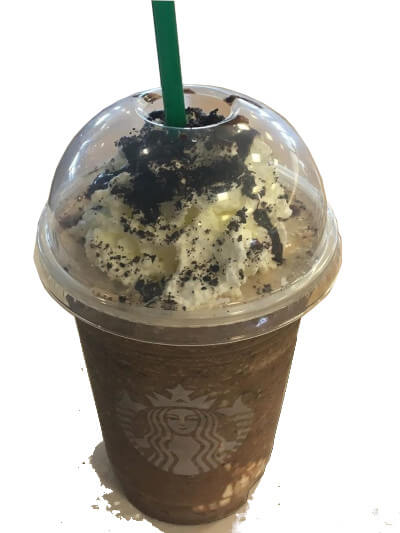 At McDonald’s, you can also find mocha drinks such as their Caramel Mocha, the Mocha Frappe, or the classic Mocha with whipped cream and chocolate drizzle on top.

They all contain either chocolate syrup or McCafè’s Mocha Coffee Frappe Base which also contains cocoa powder.

On the following photo you can see a Mocha Frappe: 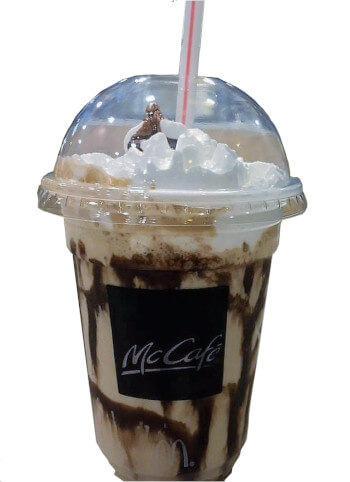 The drinks at such large coffee chains usually have more additives and more sugar compared to what you would get in a craft coffee shop.

If you go over their ingredients listed on Starbucks or McDonald’s websites, you will probably notice that the cocoa powder they use is processed with alkali.

This process is also known as Dutching and it does lower content of flavanol antioxidants that are contribute to the health benefits of cocoa powder.

If you want to take maximum advantage of the antioxidant properties of cocoa, you could get yourself a bag of unprocessed cacao powder and enjoy a cup of mocha, made with high-quality ingredients at home.

I would highly recommend this organic cacao powder that I use to make myself a cup of chocolate-flavored coffee every once in a while.

Have in mind though that it would add a bit more bitterness than what you may be used to.

The easiest way to make a classic mocha drink at home is to use a rich and flavorful sauce, such as this gourmet sauce by Monin.

It’s the one that I usually add to my classic mocha or my iced dark chocolate mocha coffee drinks.

Mochaccino vs Mocha – Are They any Different?

The Mocha and the Mochaccino are both hot coffee drinks made with the same ingredients – espresso, steamed milk, and a chocolate component (sauce, syrup, or powder).

In terms of ingredients, they are pretty much identical.

Many cafes have their mocha listed as a ‘mochaccino’ just to stand out from their competitors by using this sophisticated name.

Nevertheless, sometimes the mochaccino is served in smaller, ceramic cups (5 to 6 fl. oz.) that are used for cappuccinos.

On the following photo you can see a mochaccino served in such a cup: 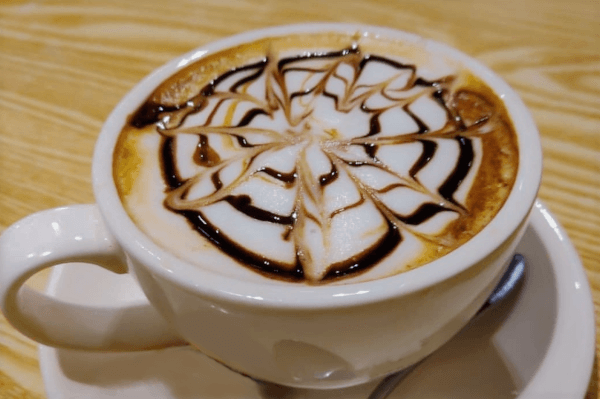 As you can see it’s also beautifully decorated with some chocolate syrup on top.

It looks tasty, for sure.

The mochaccino is often made just like a cappuccino, but with added chocolate powder or syrup.

The mocha, on the other hand, as I mentioned – is made like a latte, but again – with the addition of a chocolate component.

This means that the mochaccino would have more microfoam and less steamed milk compared to a standard mocha.

Still, there are places where a mochaccino is served in a tall glass 12 fl. oz. cup, while the mocha – in a smaller ceramic cup.

So it truly depends on the drink’s interpretation by the owner of the place you’re at or by the barista that prepares the beverage.

Overall it’s safe to say that those drinks are the same – the caffè mocha’s and the mochaccino’s key ingredients match 100%.

The word ‘mocha’ has been associated with coffee since the 15th century.

Back then coffee production has already been well established in Yemen after it had come to the country from Ethiopia. 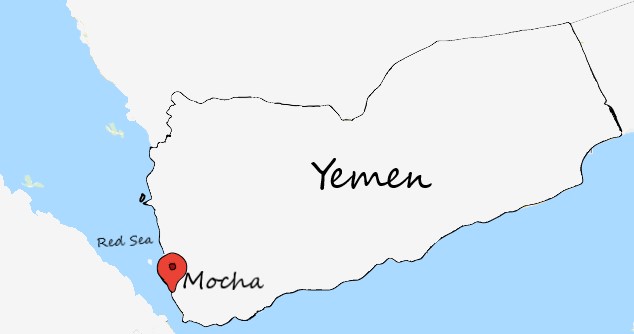 Mocha is actually a port city situated on the Red Sea coast of western Yemen.

From there, their coffee with distinctive flavor profile was exported and the word ‘mocha’ actually referred to the beans that originated from the country.

In time, this term started to be used by coffee roasters around the world to describe the flavor profile of a blend they’ve created.
This was possible because the name ‘mocha’ was not protected.

To this day you may also hear some old-school coffee enthusiasts calling coffee ‘mocha’ instead, as at some point those words became interchangeable.

The term ‘mocha’ has had several meanings over the years.

Today its most widely spread interpretation is the one describing a chocolate-flavored espresso drink.

This is most likely because Yemeni coffee beans that were first called ‘mocha’ had a complex flavor profile that had dark chocolate notes to it.

If you’re interested in finding out more about coffee – how it’s grown, harvested, roasted what’s the difference in the flavor profile of beans coming from different parts of the world – I highly recommend checking out James Hoffman’s book “The World Atlas of Coffee”.

It’s definitely a great read for coffee enthusiasts from which I’ve learned a lot.

On the other hand, if you want to dive deeper into the world of coffee I recommend checking out my beginner’s guide on the types of coffee beans.

The mocha latte is a perfect way to get your daily dose of caffeine.

Now that you know what it is made of, you can even try to make it at home.

On the other hand, if you prefer having it at a coffee shop, by knowing its ingredients, you can easily order one the way you prefer it.

What you should remember is that if you want it cold – just ask for its iced version, as the original is always hot.

At some places such as Starbucks and McDonald’s, you can find an even larger variety of this chocolate-flavored coffee drink. There you can easily go for the one that’s flavored and served in a way that suits your taste best.

I hope that through this article you got to learn something new. Leave a comment below if you have any questions.